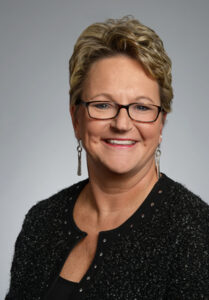 Carolyn Henry, DVM, MS, ACVIM (Oncology), dean of the University of Missouri College of Veterinary Medicine, was recently named an at-large director for the American Association of Veterinary Medical Colleges. The AAVMC is a nonprofit membership organization that works to protect and improve the health and welfare of animals, people and the environment around the world by advancing academic veterinary medicine. Henry has been involved with a variety of AAVMC committees as well as previously serving as a non-voting member of the Board of Directors. With the creation of her new position, at-large director for the North American Region, Henry becomes a voting member for business pertaining to the organization.

In this new position, Henry will also be assigned as a liaison to the Association of Public and Land-Grant Universities, where she will represent the field of veterinary medicine when it comes to funding from federal sources. The APLU is a research, policy and advocacy organization that is dedicated to strengthening and advancing the work of public universities in the U.S., Canada and Mexico. The association’s membership consists of 245 public research universities, land-grant institutions, state university systems and affiliated organizations, including the University of Missouri System.

Henry was nominated to this role based on her prior work with the APLU and because she has experience with land-grant institutions through Mizzou and her alma mater, Auburn University. She said she understands the importance of advocacy. “Having this role and working with APLU is important to me,” said Henry. “Being on the board as a voting member allows me to help shape the future of the organization. There are more and more colleges of veterinary medicine being proposed each year and we understand what the pain points are in the profession. This group is aimed at trying to address some of those.”

In addition to her new duties, Henry will be serving on a wide variety of committees within the AAVMC that include the Advocacy Committee, the Finance Committee, the Intern/Resident Wellbeing Task Force, the Research Committee, the Minority Serving Institutions Working Group and the Veterinary Nursing/Technician Education Forum.

Henry says she is excited about the opportunity to represent Mizzou in the AAVMC. “This position gives the University of Missouri representation at a higher level, not just within the AAVMC, but with other veterinary schools across the world, with the people in Washington D.C. and with our stakeholders. Coming from a land-grant institution, I feel that making sure that we are heard is especially important.”

Henry says she also wants to focus on the Minority Serving Institutions Working Group. “I have a strong personal interest in this group, and I’m continuously frustrated by the lack of diversity within our profession,” she said. “I’d like to see that change sooner rather than later.”