The MU College of Veterinary Medicine salutes our faculty, staff and students for their many achievements. We take pride in sharing their accomplishments. 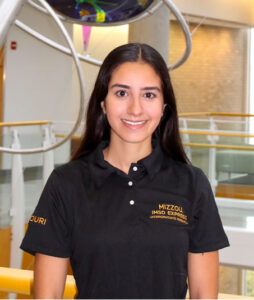 Sara Ricardez Hernandez, an MU student pursuing a PhD in molecular pathogenesis and therapeutics, and Christian Lorson, professor and associate dean for Research and Graduate Studies at the MU College of Veterinary Medicine, have been awarded a Howard Hughes Medical Institute Gilliam Fellowship for Advanced Studies.

This is only the second time a student at Mizzou has been chosen by the HHMI as a Gilliam Fellowship for Advanced Studies.

Ricardez Hernandez is originally from Oaxaca, Mexico, and moved to the United States during her senior year of high school nine years ago. She became a permanent resident while attending the University of Missouri-St. Louis, earning her bachelor’s degree in biotechnology and biochemistry. Knowing she wanted to pursue a PhD, she worked as a technician at the Washington University School of Medicine in St. Louis for two years before leaving to pursue further research at Mizzou. She currently works as a fellow in the Lorson Lab, with Lorson serving as her advisor.

According to the HHMI website, Gilliam Fellowship award winners are chosen based on what HHMI values and considers essential components of the environment, particularly the institution and adviser’s commitment to creating a healthy academic ecosystem and the student’s potential for scientific leadership. The substantial funding provided by the HHMI for this project comes in the form of $50,000 per year, for up to three years. It also provides opportunities for both advisors and fellows to engage in meetings and workshops at the HHMI headquarters in Chevy Chase, Maryland, about how to increase diversity at their own campus and academia in general. 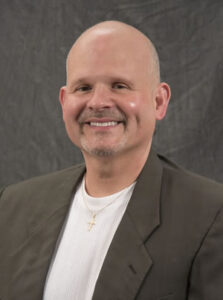 Rusty Crawford, MPA, executive administrative dean for the University of Missouri College of Veterinary Medicine, was recently named a business officer by the National Association of College and University Business Officers for its first Emerging Leaders Program. Crawford and 72 others in university administrative positions across the United States were chosen from a large group of applicants for the yearlong program. In total, participants represent 58 institutions across 27 different states, and were selected based upon the demonstration of their commitment to furthering their careers in higher education finance and strong potential for advancement.

“I’m ecstatic to have been selected to participate in NACUBO’s inaugural ELP,” Crawford said. “I’m looking forward to addressing the current challenges in higher education and identifying opportunities that will shape the future of higher education in our country.”

Crawford’s ties to Mizzou date back to 1988 when he came to Columbia as an undergraduate and earned a bachelor’s degree in biology and chemistry. He went on to earn a master’s degree in public administration with an emphasis in finance and human resource administration at MU. He will begin pursuit of a doctorate in education with an emphasis in educational leadership and policy analysis this fall at MU.

He began his career at MU in 1991 in the Psychology Department. He also worked for MU Direct and the School of Medicine before joining the UM System Information Technology Division in 2004 as the senior business manager of finance and administration. Crawford joined the CVM in August 2018.

During the Emerging Leaders Program, Crawford will work with other participants to enhance his personal leadership skills, examine the impact of the business office and cross-campus relationships, as well as gain a better understanding of the present state and future of higher education.

In a press release, Susan Whealler Johnston, NACUBO president and CEO said, “We are thrilled to add the Emerging Leaders Program to NACUBO’s suite of professional development offerings for promising business officers,” she said. “We strongly encouraged candidates from underrepresented groups in higher education leadership to apply, and this explicit focus on diversity comes at just the right time for the business office, as new perspectives are needed to help the entire sector continue to evolve.”

Twelve current residents and three former University of Missouri College of Veterinary Medicine house officers recently passed the American College of Veterinary Internal Medicine general examination. The ACVIM is a not-for-profit organization dedicated to improving the lives of animals and people through education, training and certification of specialists in veterinary internal medicine, discovery and dissemination of new medical knowledge, and increasing public awareness of advances in veterinary medical care. The ACVIM is also the international certifying organization for veterinary specialists.

The ACVIM general examination is the first step toward board certification for candidates who are participating in specialized residency training programs in cardiology, large animal internal medicine, neurology, oncology and small animal internal medicine. The next steps for these residents will be to pass credentials, pass their ACVIM specialty examination and complete their residency training programs.

Below are the names of those who passed the ACVIM general examination:

Stefan Keller, a third-year student at the University of Missouri College of Veterinary Medicine, has been named a 2021 Vet Fellow by the Foundation for Food and Agriculture Research and the Association of American Veterinary Colleges. Mentoring Keller in his research is Roger Stich, MS, PhD, a professor of parasitology at the CVM. Keller will be working with Stich to identify anti-tick vaccine candidates to block transmission of anaplasma marginale, the cause of anaplasmosis in cattle.

The award is only given to up to 15 applicants per year and provides a $10,000 stipend to be used to perform research with a qualified mentor. Along with the stipend, students receive an invitation to participate in a virtual meet-and-greet with FFAR and AAVMC staff, along with other 2021 FFAR Vet Fellows, and admittance to National Veterinary Scholars Symposium.

Keller says he is honored to have this opportunity. “I want to pursue a career in research at the USDA (United States Department of Agriculture), and I am very excited to have the chance to connect with other students and professionals with similar interests,” he said.

Congratulations to the MU College of Veterinary Medicine Research Day award winners. The recipients, who were acknowledged for their excellence in research on May 7, are listed below along with their mentors.