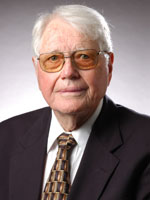 Clifton Neal Murphy, DVM, PhD, 93, a former faculty member in the MU College of Veterinary Medicine, passed away after a brief battle with cancer on Jan. 3, 2020, at Boone Hospital Center in Columbia, Missouri, at the age of 93. A celebration of life will be held in the spring at a date to be determined. There will be a private ceremony of interment at Jefferson Barracks in St. Louis.

Following his military service, he attended the University of Missouri, receiving his doctorate of veterinary medicine in 1952. From 1952-1954 he was employed as an assistant professor at the Oklahoma College of Veterinary Medicine in Stillwater in the Large Animal Clinic. He received a training degree in tropical veterinary medicine in 1956 from the Royal Dick Veterinary College in Scotland and his master’s degree from Colorado State University, Fort Collins, in 1961. From 1954-1982 he was employed in various veterinary positions, serving as a consultant while living in Ethiopia and India, in private practice in Oklahoma, and working for the Oklahoma Department of Agriculture.

He was preceded in death by his parents, his older brother, his twin brother, and his son, Clifton Charles Murphy.