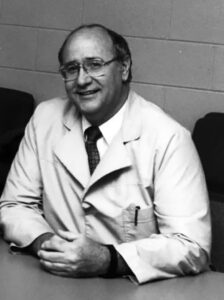 As a board-certified neurologist, Simpson joined the CVM in 1977 and worked here for three years. Simpson is remembered by many of the current faculty as an advisor and mentor.

He was preceded in his death by his wife, Lyndal Balentine Simpson, his parents, his brother, Warren Simpson, and a nephew, Warren Johnson. He is survived by his son, Stephen Simpson, and daughter, Dana Pritchett, four grandchildren, Chad Simpson, Matthew Simpson, AnnaKate Simpson and Xander Pritchett, and other relatives.

Simpson was born on Nov. 8, 1946 in Atlanta, Georgia, to Creighton and Betsy Simpson. He graduated from Auburn University in 1971 with a doctor of veterinary medicine degree. He continued his education, earning a master of science degree at Purdue University, where he completed a residency in neurology and neurosurgery in 1977.

Upon his graduation, he joined the University of Missouri College of Veterinary Medicine, where he stayed until 1980. He then returned to Auburn, and would remain there for 27 more years, retiring in 2007. Simpson was named an associate professor emeritus in the Department of Clinical Sciences at Auburn following his retirement.

At Auburn, Simpson was very well respected, training thousands of students in professional veterinary curriculum, as well as serving as a mentor for twelve residents in neurology and neurosurgery, including CVM Professor of Veterinary Neurology and Neurosurgery Joan Coates, DVM, MS, Diplomate ACVIM-Neurology.