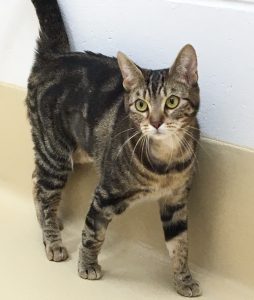 Humans and animals are made up of trillions of cells, and each cell contains DNA specific to that individual. Therefore, identifying DNA that causes genetic disorders gives researchers and clinicians a better understanding of how to treat inherited diseases and possibly prevent the diseases from being passed down to future generations.

Now, researchers at the University of Missouri have located a specific mutation in the gene responsible for causing Chédiak-Higashi syndrome, a rare condition that weakens the immune system and leaves the body more vulnerable to infections. In their new study, Leslie Lyons, a professor of comparative medicine at the MU College of Veterinary Medicine, and Reuben Buckley, a postdoctoral fellow, found the answer by creating a DNA map of a domestic cat with the syndrome.

“Different treatment options target different parts of the gene, so we needed to know which part of the gene was messed up in order to target therapies to the appropriate place,” Lyons said. “Similar to finding a specific address, we knew we had the right street but we needed to find the exact house, and modern DNA sequencing helped us find it.”

Collaborating with reproduction specialists at the Cincinnati Zoo and Botanical Gardens, Lyons worked with Smokey, a 16-year-old male cat who served as the last biomedical cat model for Chédiak-Higashi syndrome before passing away. Through in vitro fertilization, Lyons was able to use semen from Smokey to resurrect the previously extinct feline disease model. Learning if cats are genetic carriers of a certain disease can be useful so that breeders are aware of which cats to avoid breeding together in order to prevent their offspring from being affected.

Lyons’ research team is also studying genetic mutations that cause other diseases, such as polycystic kidney disease, a common inherited disorder that affects hundreds of thousands of people each year and can lead to kidney failure. She highlights the value of translational medicine in her research.

In addition to translational medicine, Lyons’ research is also an example of precision medicine, or tailoring specific treatments for a patient according to their individual genetic makeup. Precision medicine will be a key component of the NextGen Precision Health Initiative by helping to accelerate medical breakthroughs for both patients in Missouri and beyond.

“Assisted reproduction mediated resurrection of a feline model for Chédiak-Higashi syndrome caused by a large duplication in LYST” was published in Scientific Reports. Funding for this project was provided by the Office of Research Infrastructure Programs/OD R24OD01092, the Winn Feline Foundation (W16-030), University of Missouri Gilbreath McLorn Endowment and donors to the 99 Lives Cat Genome Sequencing Project. The content is solely the responsibility of the authors and does not necessarily represent the official views of the funding agencies.