The University of Missouri College of Veterinary Medicine welcomes Clinical Pathologist Saundra Sample DVM, DACVP. Sample is originally from La Grange, Illinois, and has traveled the United States and beyond to learn, teach and practice veterinary medicine. She attended the University of Illinois College of Veterinary Medicine and went to the University of Wisconsin for her residency, with a few other stops along the way. She eventually arrived at Ross University, St. Kitts in the Caribbean. She remained there for five years until returning to the United States to join the MU CVM. 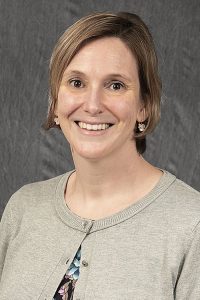 “I really loved the university down there, but I was looking to get back into a place with a busy hospital, lots of cases, a reputation for being student friendly, a strong residency program, and a place that the Ross students were happy,” said Sample.

Ross, another AVMA-accredited school, has an accelerated program that requires students to do clinical rotations at another veterinary program for their final year. Sample used those students’ experiences as a way to find a new landing place at Mizzou. “They are kind of little markers for how well students are being treated, and that was really important to me,” she said.

As a clinical pathologist, part of Sample’s duties will include lab work. “We work with diagnostic medicine. So looking at blood work, urinalysis, aspirates, and helping keep the lab up and running,” she said. On top of that, she will be teaching a clinical pathology class to second-year students. “That’s a big part of it, we teach on the clinical rotations and we also do service for the hospital. It’s about 50/50 between the two, they keep us pretty busy.”

She stated that she enjoys teaching, but apart from her role at MU, Sample has some interesting hobbies. She has compiled a large number of underwater photographs that she captured while snorkeling during her time in the Caribbean. She also enjoys musical theater and the role playing game Dungeons and Dragons. “It’s a lot of fun and I have a game that I play on a weekly basis with friends over the internet. I’m a big nerd,” she said.