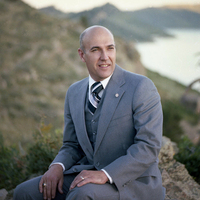 Dr. Creed was born Dec. 10, 1932, to William Henry and Frances Willard Judy Creed at their farm in Atchison County, Missouri. He graduated from Fairfax High School in 1950 and met the love of his life, Jayne Headley, at a high school basketball tournament that same year. They were married on Aug. 16, 1953, at the Methodist Church in Oregon, Missouri.

He was in the Air Force ROTC for four years and graduated from the University of Missouri with a bachelor of science degree in agriculture in 1954, planning to be a farmer. Shortly after graduation, he was commissioned as a lieutenant in the Air Force and stationed at Lockbourne AFB, Ohio. While he was in the Air Force, the Creeds welcomed two little girls, Joan, and Joy. After two years in Ohio, the family returned to Missouri.

He attended the University of Missouri College of Veterinary Medicine, earning earned a doctor of veterinary medicine degree in 1961. While in vet school, the Creeds welcomed a third little girl to their family, Julie. He then began a long, successful career in veterinary academia as a faculty member and administrator. While at Colorado State University, the Creeds welcomed a fourth little girl to their family, Janet. He completed his master’s degree in veterinary surgery from CSU in 1967 and his American College of Veterinary Surgeons board certification in 1974.

He served as a professor and chairman of the Department of Veterinary Medicine and Surgery at MU. He also served as assistant dean for service and director of the Veterinary Teaching Hospital at Oklahoma State University. He had a special love for teaching the many students he mentored. Following his retirement in 1999, the Creeds returned to the home they loved in Columbia. In 2013, they moved to St. George, Utah, to be closer to family.

He was a devoted member of the Church of Jesus Christ of Latter-day Saints and held many church callings over the years, including that of Bishop of a student ward in Columbia when he was 70.

Due to the pandemic and recent spike in corona virus cases, services will be held at a later date.