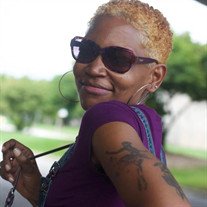 Ameia L’Kay “Kay Kay” Ferguson, the daughter of Helen M. Ferguson and Earnest Willis, was born July 19, 1974, in Gary, Indiana. She began her formal education in Milwaukee, Wisconsin. Upon graduating high school in 1993, she moved to Fort Jackson, South Carolina, where she would complete basic training to become a member of the United States Army. After basic training, she returned to Milwaukee to begin the next phase of her journey and started her family. Some years after giving birth to three daughters, she relocated to Columbia, Missouri.

She earned an associate’s degree in applied science for medical laboratory technicians in 2012 from Moberly Area Community College. Shortly after graduation, she began her career at the University of Missouri Veterinary Medical Diagnostics Lab working in the Clinical Pathology section.

Ferguson started dancing in the eighth grade at Kosciuszko Middle School and continued at the Milwaukee High School of the Arts.  She developed a love for painting canvasses and getting tattoos. In her leisure time, she enjoyed camping, hiking and exploring the outdoors. In August of 2020, she completed a 28-mile hike in just two days.

A fund has been set up to help support her daughters: https://www.gofundme.com/f/celebration-of-ameia-fergusons-life